A Wind in the Door (A Wrinkle in Time Quintet)

With the movie adaptation of A Wrinkle in Time in theaters, now is a good time to continue with the series. A Wind in the Door is my personal favorite of the series, and magical for kids and adults. Meg rides again, this time on a quest to save not the world, but a single life. The micro universe is just as epic and enthralling as the cosmos, and the Cherubim who accompanies Meg on her adventure ranks as one of my favorite angels in fiction.

Something More Than Night

Speaking of angels, if you’re in the mood for something different, Something More Than Night may fill the bill. Angelic choirs, conspiracy, threats to reality itself, and a young woman in the wrong place at the wrong time collide in this trippy noir tale.

If I had to describe The Goblin Emperor in a word, it would be “sumptuous.” Those who like more action-oriented fantasy, this ain’t that! The pace is deliberate, events unspooling gradually among smaller domestic vignettes. Fans of worldbuilding (an interesting blend of elves, steampunk, and a rigid society modeled after imperial China) and intricate, lovely description will have a ball.

Another deliberate book, The Golem and the Jinni is as much a historical or literary novel as it is a fantasy, following the travails of a naive young golem woman and a hot-headed jinni newly freed from his lamp. The characters are three-dimensional, with inner lives and anxieties that make them feel real. The little details of immigrant life in turn-of-the-century New York are so well rendered you can almost smell the food and hear the clatter of traffic.

If you haven’t read Good Omens, now is a great time to get on the trolley. Neil Gaiman and Terry Pratchett together is pure alchemy, and with the TV adaptation in the works there will be no shortage of people to have very grown-up discussions with.

This blog is a participant in the Amazon Services LLC Associates Program, an affiliate advertising program designed to provide a means for me to earn fees by linking to Amazon.com and affiliated sites.

Given that I’m getting around to books that have been hanging out on my GoodReads list since 2013, it’s safe to say that my book reviews aren’t necessarily aimed at the latest and greatest. There’s plenty of people doing a better job than I could of keeping their finger on the pulse of new releases. One of the great things about books is that they stay relevant and worthwhile long after their release month.

Snow Crash came out in 2003, so it’s safe to say I’m late to the party on this one. It’s still a party, though. Neal Stephenson gets my respect for many reasons, but naming the MC Hiro Protagonist? That’s a masterstroke, right there. My hat is off to you, sir.

Clicking the cover image will take you to the book’s Amazon page. How gorgeous is that cover, by the way? I love it!

For those who, like me, missed out on this title when it was new (which is sad, because my teenage self would have adored it), Snow Crash is a cyberpunk action-adventure that feels like an 80’s summer blockbuster. The United States is a hellish, hyper-capitalist urban sprawl. Profit is king and human life is cheap. That being said, the world of Snow Crash doesn’t take itself too seriously, if Hiro’s name weren’t proof enough. The Mafia has cornered the pizza delivery industry. Kill-bots have the mentality of friendly pit-bulls (they’re good doggies, yes they are!) and everything from businesses to suburban communities are run as sovereign corporate franchises, complete with goofy advertising. It would be a dismal place to live, but the characters who call it home seem to take the absurdity of their world with good humor.

Hiro is, of course, a down on his luck hacker. He also wields a katana inherited from his war veteran father, as one does. He’s earnest and more than a little socially awkward, and avoids being the sort of irritating nerd-boy power fantasy his character type can fall into. He’s also not white, which is still a breath of fresh air here in the far-flung future of 2018. It also plays into some of the most cutting social commentary in the book, as Hiro, mixed-race and black, must contend with white supremacists during the course of his adventure. If anything, this subplot is even more relevant this year than in 2003.

Hiro’s partner in crime (she’d definitely balk at being called his sidekick; I’m sure from her point of view it’s the other way around) is the crude and clever Y.T., a fifteen-year-old courier Hiro meets by chance in the opening chapter in a hilarious action sequence that clinched my love for the book within five minutes of picking it up. Y.T. sometimes treads over the line into Badass Action Girl cliche, but she’s such a shithead the rest of the time it’s hard to be annoyed. She gets the lion’s share of the fun action setpieces, and her resourcefulness and all-around chutzpah are endearing. Fair warning: there are characters in the book that aren’t above creeping on a teenager, and there is a dubious sex scene involving one of the antagonists in the third act. Fortunately, it’s telegraphed well in advance for those who need to skip it. I thought it was handled fairly well, but forewarned is forearmed.

The overarching plot is something I wouldn’t want to spoil for those who’d like to give the book a try, but suffice it to say Stephenson came up with a central mystery around the titular Snow Crash (a new illicit drug, or is it?) that is original and a real delight to puzzle out alongside Hiro and Y.T.

With a Snow Crash TV adaptation apparently in the works from Amazon, now would be a good time to grab the book!

This blog is a participant in the Amazon Services LLC Associates Program, an affiliate advertising program designed to provide a means for me to earn fees by linking to Amazon.com and affiliated sites.

So, these days I do most of my stuff on Word or Scrivener, but such wasn’t always the case. Microsoft Office is expensive (unless you get your copy from your alma mater, like yours truly). Scrivener is a very reasonable $40, but that may still be $40 you don’t have (been there), and it’s aimed at a few specific types of writing.

There are plenty of alternatives that offer a decent-to-great experience that don’t cost a penny. By no means have I tried all of them, but I’ve used a handful. Maybe someone will find them handy.

END_OF_DOCUMENT_TOKEN_TO_BE_REPLACED

This blog a participant in the Amazon Services LLC Associates Program, an affiliate advertising program designed to provide a means for me to earn fees by linking to Amazon.com and affiliated sites.

One of my New Year’s resolutions, now that I’m done with school, was to get back in the habit of reading for fun. To that end, I wanted to read a book a month. That wasn’t quite ambitious enough, so I’m going for a book a week.

This week, I read Replica by Lauren Oliver. I picked it up on impulse because the cover was pretty (I’m a magpie like that). Sometimes this strategy fails me, but I couldn’t put this down from the first page until I finished it.

If you want to check out the book for yourself, clicking the cover image will take you to its Amazon page.

Replica is YA science fiction with an experimental twist. It’s actually two books, following two protagonists. The girls’ paths cross and meet up, but they each are following their own quest. Start from the front of the book, and you follow Lyra’s story. Turn the book upside down and start from the back, and you can read Gemma’s story.

Lyra is a subject at a secret medical research facility. She and another subject, a boy called 72, escape and are thrust into the great unknown of the outside world. Gemma, a sickly girl, has her own connection to the research facility, and endeavors to uncover the truth about what it was up to. Danger is never far behind, and the body count doesn’t take long to start climbing.

The two narratives are written in such a way that you can read either one all the way through, or alternate between the girls. I was boring and read through all of Lyra’s story, then moved on to Gemma’s. Still, the gimmick is pretty ingenious. The girls have very different outlooks and voices. When I reread, I’ll be alternating, since I’m sure that will give the stories a different feel. I don’t know what reading method I’d recommend; there’s really no wrong way to do it. The dual narratives just add another reason to read the book multiple times.

Lauren Oliver writes with an immediacy that keeps the tension high, but her style isn’t so spare as to not have some strikingly beautiful prose. The girls are instantly compelling. I especially fell in love with Lyra, who is clever and observant underneath her childlike demeanor.

I can fully recommend this book. Clones and cover-ups and conspiracies, what’s not to love?

In the grand tradition of the Great Recession, my post-grad, unemployed ass is taking a shot in the dark. Let’s see if I can make a go of this writing thing, eh?

This isn’t going to be a place where I toot my own horn and spam constantly. Expect my (possibly disjointed and rambling) thoughts about writing, links to things I think are helpful or interesting, and the occasional picture of my cat. 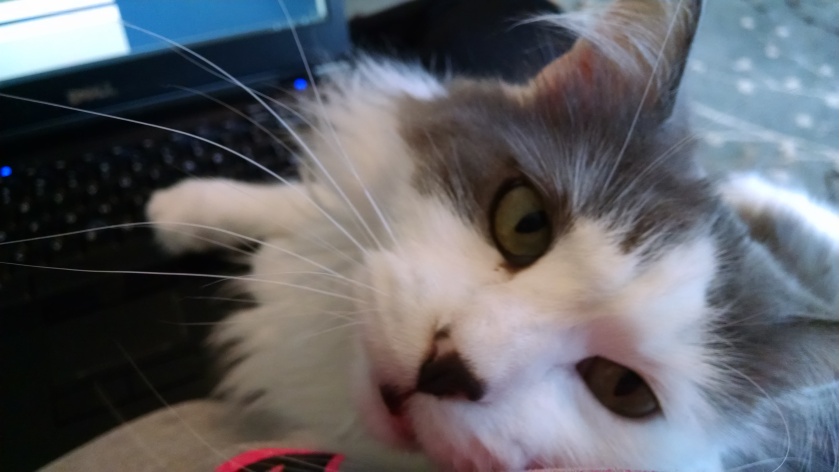